February 29, 2012 marks the fifth international Rare Disease Day. On this day hundreds of patient organisations from more than 50 countries worldwide are organising awareness-raising activities converging around the slogan "Rare but strong together".

Many rare disease are invisible. They include disorders of metabolism, where the body doesn't make enzymes needed to utilize nutrients essential to life, others where processing errors allow toxins to slowly destroy organs, brain and muscles and others where the body produces toxins. Over 6,000 rare diseases have been identified so far and for the most part they are incurable, and often there is no treatment.

My particular rare disease is Hypokalemic Periodic Paralysis, an inherited genetic disorder which causes temporary attacks of flaccid (rag doll) paralysis triggered by eating carbohydrates, an unusual level of physical activity, sleep or immobility, by medications (like muscle relaxants, pain meds, anesthetics and any medication which lowers the level of potassium in the blood) and by stressors such as overheating, chilling, hunger and pain.

I have lived with this disorder since birth and while it has disabled me physically it has taught me many valuable lessons about life as well. I often think of these lines from Henry Van Dyke's poem,

But often faltering feet
Come surest to the goal;
And they who walk in darkness meet
The sunrise of the soul.

I am honoured to be president of Periodic Paralysis International a non-profit organization which has served periodic paralysis patients around the world since 1996. Visit us today and show your support by "liking" our website!
Posted by Deb at 11:30 AM No comments:

I am of the nature to grow old. 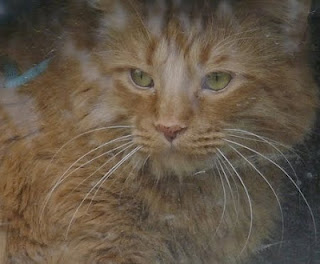 While he was being treated for increasing arthritic pain in his back and hips, the acute phase of his illness lasted only three days. We have a wonderful vet, who did everything possible to ease his pain, but we were not successful. The vet cried with me as we eased the big beautiful boy into that gentle sleep from which we do not awaken in this world.

I have a giant Salvador-shaped hole in my heart, a heart that is riddled with other holes as well, shaped like Patches and Fred, Nosey and Fatty and Bully Boy. Little pieces torn from the fabric of life. Anyone who hasn't loved and been loved by a creature innocent of all agendas, who dances only in the breathing moment, has yet to live.
Posted by Deb at 8:17 PM 3 comments: 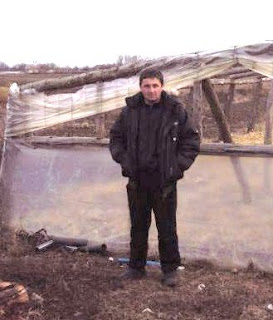 Lubomir lives in the village of Gladkovka with his wife and daughter. In his greenhouses, he grows early-season vegetables for sale. On 1 hectare of land, he annually grows 8,000 tomato plants, 2,000 cucumber plants, and 10 tonnes of potatoes. Lubomir has been a farmer for four years. His working capital totals about $10,000, while his take-home profit is approximately $650.

Lubomir needed a loan of $2,500 in order to purchase seeds, fertilizer, firewood and plastic film.

These additional funds are needed to perform timely maintenance on the greenhouses and to prepare properly for the spring season, so as to produce a good harvest.

Together several KIVA lenders loaned him the $2,500 he needed and now this obviously very hard working man can get on with his spring work.
Posted by Deb at 12:50 PM No comments:

I like Vincent Van Gogh's work anyway, but this is one of my favourite paintings, and it's given new dimension in this interactive video. Watch it full screen if you can. Gorgeous!

Kleshas and the Supreme White Man

We sat yesterday morning as we do most mornings, sipping from our cobalt mugs half-coffee-half-milk, watching the CBC news. One of the leading stories was that the hacker's group Anonymous had hacked into the Canadian Neo-Nazi's database and turned over thousands of documents, e-mails, plans, discussions and such to the CBC. 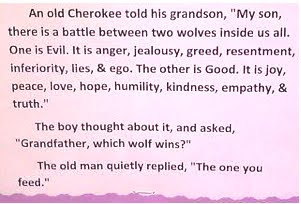 The story revealed that there are fewer than 100 members of so called "White Supremacy" groups in Canada, but they have been associated with some ugly attacks on other citizens recently. They are a minuscule minority in a diverse population that for the most part is extremely tolerant of difference. You wonder about the people in these violent groups, so filled with hatred and rage, and what tragic paths brought a once innocent child to such a state. What terrible lives they must lead.

I'd had a rough day Wednesday, wrestling with my very aggressive ego, and my sweet husband began my day with the question, "How are your kleshas today?"

I laughed and told him that "so far" they were well-behaved. But in each of us is that impulse to lash out, to feel the surge of power being in control, being able to hurt, to deny or grant. The "charge" of aggressiveness hidden beneath the soothing hand, at every breath the impulse asks, selfish or altruistic, hurt or heal?

As we deal with others the kleshas rise as regularly as the pulse. When we come to the point where we recognize that we make the choice between self-interest and serving others almost as unconsciously as breathing we tear back the mask and are face to face with ourselves. It's not an entirely pleasant experience for someone who thinks of herself as as "humanitarian". (As Lucy in Peanuts said, "I love humanity, it's people I can't stand.")

And so our morning conversation moved to Jean Vanier, whom I greatly admire. Vanier is founder of L'Arche, group homes staffed by volunteers who care for developmentally disabled adults. He was idealistic and had this pretty dream of founding a group home, full of radiant love, but when his dream was realized and his first group of disabled adults came, he found he didn't like them.

Like the young monk who came from Japan to teach Zen Buddhism in the 60s, and whose only students were dirty, unkempt hippies who came to class high on drugs, Vanier was repulsed by the very people he had pledged his life to serving. The monk sobbed his heart out at night, because he was teaching tolerance and love during the day while barely suppressing his revulsion for his students. Vanier spent many a night agonizing as well. And in the end both men came not just to like but to truly love, not with a sentimental "so-sorry-for-you" love but with deep compassion.

The true hero is not the one who had a magic cape and sailed in blissful serenity above the cares of men. The hero has faced agony of spirit when standing at the bottom of the wall of self-realization. The self-interested child inside urges violence, from the impatient or sarcastic word aimed at someone who annoys you, to the beating or burning of one who is a different colour, a different religion, a different political persuasion - The sarcastic word and the beating stem from the same dark urge, and having uttered more than my share of sarcastic words I can understand how overpowering the rage must be that makes people lash out in violence.

My own dark urge is only different in its intensity, in my own ability to regulate my emotions and my slowly awakening realization that the skinhead on the street and his victim are both deserving of compassion. The only way to stop the cycle of violence is to stop being violent.
Posted by Deb at 9:05 PM No comments: