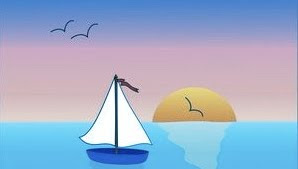 Sailors used to dread being caught in the doldrums, no wind, just the rolling sea and constant featureless vista in every direction. Well, that is exactly where my search for George Perkins is. I pore through the records, and peer over piles of ancient-and-gone Perkins' and see no sign of George, who was my 3rd great-grandfather. The genealogical sea ripples with Perkins families, none of them apparently willing to claim my George.

I'll tell you what I know. He is silent and uncooperative. He told the census takers that he was born in 1781 in Georgia. He married a woman named Elizabeth and had two sons and five daughters; John W, Keziah, Rachael, Nancy (my gg-grandmother), William, Rebecca and "Polly" (usually a nickname for Mary). He owned a fair amount of property in the area of Mobile Alabama in 1830-1850, then he and Elizabeth moved to Union County Louisiana to live next to their son John W. John and other members of the family moved on by 1860 to Angelina Co Texas, finally settling in Robertson Co Texas. But George doesn't appear to have gone with them. He and Elizabeth disappeared for good between 1850-1860, last seen in Union Co Louisiana.

Another researcher says George was the son of Jacob Perkins and Betsy Cole Perkins of Richmond Co North Carolina. This is possible, as a George Perkins in the right age category lived next door to Jacob in 1810. This theory is strengthened somewhat by the fact that George's first child (John W) was born in 1810 in North Carolina. But there is no mention of a George in the well-documented lists of Jacob and Betsy's children. Nor can I find any other documents which tie George and Jacob together in any way.

You always come to a dead end with genealogy (no pun intended). There comes a point when historical records fail, but for the most part that's been long before 1781 for me. One thing Colonial America was good at was keeping records.

So, George, if you read blogs, and have any pity at all, please step from the shadows and drop some documentary evidence of your parentage into my mailbox. It's the right thing for you to do, because I know you didn't spring fully formed from a mushroom patch.

Of course, I'd take hints or documentation from anyone with Perkins blood, or data. :))
Posted by Deb at 3:17 PM No comments:

Labels: George Perkins b 1781 who were his parents

Walking the cat in the brilliance of the spring sunshine I note that the branches of the weeping willows look like strings of gold beads, the buds on the mock cherry trees have burst open to reveal what looks like tight clusters of infinitely small green grapes. Over the next month these will swell and evolve into fragrant white blossoms.

Cat is interested in rolling in the grass and lying in the sun. I stand and watch a red tailed hawk spiral in the current rising off the clay banks.

I hope that it's as beautiful 2500 miles or so to the south, where at this moment, a funeral is being held for my sister-in-law June.

June entered my life as she entered my brother's, when I was five or six years old. She was small, with dark blond hair and an air of neatness and precision about her. She was the first person in the family to realize that I was no longer a child, and treat me as an adult. She and I became really good friends. We had many interests in common, genealogy, quilting, good food, but it was more than common interests that bound us together. We just clicked. I was the sister she never had.

June passed away Friday. It was not unexpected, and death came as a mercy. She had Alzheimer's and June the person had been gone from June the body for years. But her loss, even the loss of the tiny, fragile, immaculately-cared-for but unconscious body hurts.

I have her letters, her recipe for German chocolate cake, the sock monkey she made me the year I turned six, and a long, long memory. I have a June-sized, and shaped, hole in my heart. Bye June-bug. I miss you.
Posted by Deb at 1:16 PM 2 comments:

Two in love can live on the edge of a sword 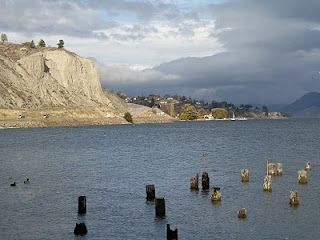 It just occurred to me that we began this journey four years ago this month, when I got the crazy notion that we should ditch 90% of our material possessions, move into a trailer the size of my brother's walk-in closet and head for a place we'd never even visited before.

And so older son Ian and I found ourselves on a cold March day, in a sodden parking lot, inspecting a battered 35-year-old trailer that smelled like well-aged piss and deteriorating foam cushions. It was horrible, but had a good floor plan and appeared structurally sound. We bought it before we could talk ourselves out of the idea.

We spent the next several months ripping and renovating, and in July I started this blog. But lately I find myself floundering. What's the point? Time to go back to the beginning and start afresh.

I've come to a point in life where the material accumulations of a lifetime are weighing on me. And, though I speak in the singular, I think "We've come". Thankfully for my mental health my significant other shares my feelings. So, we have begun to divest ourselves of the collected bits 'n pieces of 40 years together. Early in our marriage we could move house in the trunk of the '59 Ford we'd named Rocinante (after Don Quixote's reluctant plow-nag). Two in love can live on the edge of a sword.

Then came babies who became growing boys. We needed some things and wanted others. He built model ships, planes and lovely furniture. I sculpted, painted, quilted, collected dolls, china and antique linens. Our children made wonderful things for us. We inherited beautiful things from generations past. We clutched at our possessions and they clutched back. Like fractious infants they demanded tending. I worried about spots on the crystal, wrinkles in the tablecloth and dust collecting on 200 "objects d'art".

One day it dawned on me that everything I own owned me back. That's fine when you have the interest and motivation to keep up with your mutual ownership, but time marches on, and I find myself without either. I would rather spend my energy elsewhere. Our children thought we had finally flipped our collective lid when we said we were simplifying our lives enough to move into a 25' long travel trailer, and head for warmer climes. I suppose time will tell. Lids may have been flipped, but, in our own minds, we are preparing to move back onto the edge of the sword.

Surprisingly the transition has been almost painless. We've had a huge amount of help from our sons, from friends, and from people we've hired to fill in the occasional gap. The tiny trailer has been swapped out for a newer, larger and much better equipped one, but the principle remains the same. Live as simply as is comfortable. Enjoy every day, every hour, even those which are uncomfortable. Listen to your body and follow its wisdom. Stretch your boundaries.

As we enter year five, who knows what we will discover?
Posted by Deb at 9:51 PM 3 comments:

Apparently on its way. Down the street Del's crocus bulbs are blooming, the trees are budding and the daylight hours creep longer and longer. 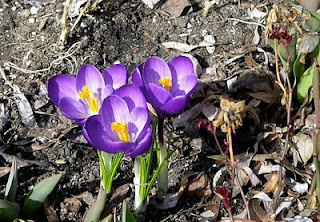 The average daily high for this two week period is nine degrees C (48 F). The warmer temperatures are much appreciated I assure you. 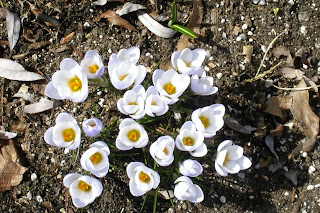 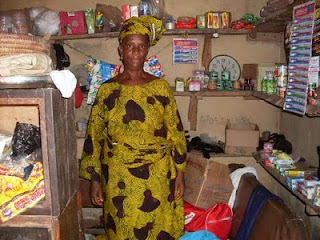 This month our KIVA loan is going to Janet Igbinoba of Benin City, Nigeria.

Janet is a 60-year-old widow with six children and several grandchildren. Life as a widow has been very challenging to her and the family.

Right now she has a small stall from which she sells groceries and drinks. She loves her business because of the one-on-one interaction that she has with her customers. She uses her years of experience in business to attract and retain more customers. She hopes to own a supermarket in the future. She will use her loan to buy more stock for her stall and sends a "thank you" to all KIVA lenders.
Posted by Deb at 5:33 PM No comments: