Nothing's really as it seems

[Morgan Freeman]
So, what are we really made of?
Dig deep inside the atom
and you'll find tiny particles
Held together by invisible forces


That's a wonderful and significant story


[Feynman]
I gotta stop somewhere
I'll leave you something to imagine

Where *did* I put the flaming torches?

Of course being human we primarily think of ourselves as experiencing dukkha, but in the last couple of days I've seen something that's made me more aware that we are not alone in clinging to a past, and it makes me sad, because I know this is a story played out thousands of times a day, and probably many more. 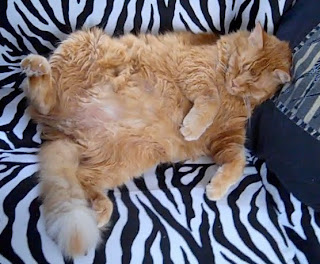 Last February we lost our elderly cat Salvador, who was a boisterous and outrageous personality. It is no exaggeration to say that we are still mourning the absence of our enormous red "boy". The grief is still acutely painful at times, and for those who think that's over the top - well - that doesn't make it any less so. And if you don't understand it's because it wasn't your relationship, and the hole is not in your heart.

It was really only a matter of a couple of days after Sal's death that I knew I couldn't live without a cat, which is how Smoky came into our lives. The woman we got him from said he'd belonged to her neighbours, who grew tired of him, or bored or busy or whatever… and simply "threw him away" in the middle of an Alberta winter. She asked permission to take him in and find a new home for him, which is how he came to us.

From the beginning it was clear he prefers men and he absolutely loves our older son. When Ian arrives Smoky is all over him. Yesterday our younger son Zak arrived for his first visit since we got Smoky and Smoky spent almost the entire day and evening in Zak's arms. It was clear he was totally smitten. He spent the night sleeping at Zak's side, and now, when Zak is out with friends, Smoky is curled up in Zak's suitcase, on Zak's dirty clothes. 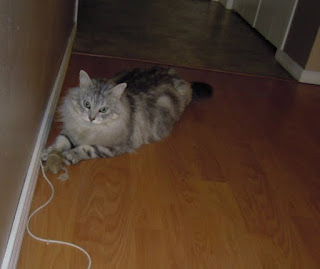 And it occurred to me that Smoky is in much the same position as we are. He's suffering the same grief that we're feeling. We're attentive, loving, replacements for a young man he loved very much, and who discarded him without the least thought for the pain and unsatisfied longing that will never ever be resolved in that stout and loving little heart. Their separation was as final for him as the death which parted us from Sal, but at least we understand old age, pain and death. There is no way for a small and completely devoted cat to understand how the person he loves could be so callous.

But there is this. Grief is impermanent too. We comfort each other, and in time our wounds will heal.

Richard Feynman - The Pleasure Of Finding Things Out

Some people are Beatles fans, here's one of the stars who could count me as a fan. Wish he was still around.

The two things people most want to know

When I watched this the first time I thought it was a hoot. The second time I watched it struck me differently. Mary Maxwell is 72, and though I'm certain a lot of what she said was for comic effect, her remarks seem more likely to apply to today's 85 year-old than the 70s crowd. But then she is speaking to an audience of people who provide professional caregiving services for the elderly in their homes. They aren't there to hear about how the newer generation of "old folks" are aging slower than their parents and grandparents, assuming they have taken care of themselves.

I look at my 71 year old husband, and even though he has significant health problems he has none of the doddering attributes of age Mary Maxwell talks of. He is not absent-minded, he is the "detail-man" of the household. He keeps track of the household accounts, my business accounts and a non-profit account he is treasurer of without the slightest problem. He is extremely pleasant and enjoyable to be with.

I complain that I cannot find the word I am looking for. He reminds me I've been complaining of this since I was 20. My head is a busy place, but generally working on a project or problem, not thinking about earrings or the hairdressers.

What I find is on the whole is basically we are not much different at 66 and 71 than we were at 20 and 25. Wiser, more settled, more compassionate and far richer in experience but we still prefer the company of one or two people over a crowd, and for a good portion of the day each of us needs to be entirely alone. We have no more interest in popular culture now than we did then, and aside from the news, PBS Science programs and the odd documentary we could probably live without TV, though we cannot say that about our computers, reader and ipad. Since he was a programmer back when computers were the size of Volkswagons we have always embraced computer technology. Also sworn at it a good deal, but still...

So, crack your jokes Mary. I like the short clips on her blog, where she hands out some fairly acid advice to people like the mother-in-law who didn't want to share her "treasured" family recipe for marinara sauce with the daughter-in-law she "doesn't trust". Mary concludes her advice by saying, "I've tasted your marinara sauce, and it's not worth fighting over." (or something of that ilk)

Mary blogs about being older with her characteristic dry wit here. I'm adding her to my blog roll because she is one funny lady and Lord knows I need a funny and LOLcats has just become too repetitive and predictable.