Is this Heaven or what?

The last few days have been devoted to that prime joy - gardening. One of the devastating parts of leaving our little tin palace on the lake in the Okanagan was that I left behind my lovely garden that I'd put three years of work into. Granted I learned something valuable there, namely that you shouldn't try to stuff one of every kind of plant that will grow in your zone into a six by 40 foot strip of gravelly soil. But it sure was fun.

Yesterday morning Kevin from Excelsior Landscaping came with a helper to set up our community garden. They assembled the garden beds and filled them with garden mix. Those should be ready for the gardeners in another few days, as soon as we have water piped into the garden. After Kevin and crew left I planted some of the plants I'd bought, and today I planted more. 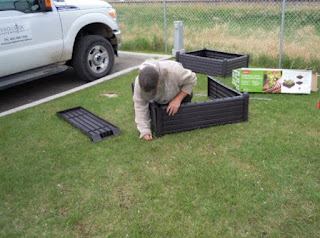 We arrived here in the dead of winter and it took me ages to settle in. The trees blossomed gloriously in the spring, then the "landscaping" began to grow (or not, depending on its quantity of ambition). There is a 20 foot wide and 100 foot long walk approaching the front entryway. The third closest to the building gets only two or at most three hours of morning sun. 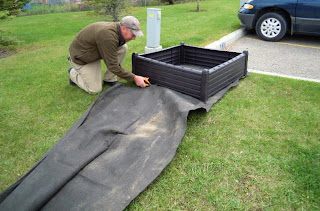 Serviceberries, which are a plain Jane shrub if ever one was, but which will grow in the deep shade, are planted in a 12 foot long bed to the right in the bed nearest the building. Last year these got seven feet high and just as wide, over growing the sidewalk. But the bad part was that they were absolutely, completely, covered in aphids. The aphids secreted so much sticky "honeydew" that they hung in long and snotty globs off the coagulated leaves. I've never seen such a mess. They were disgusting.

The other "landscaping" consists of half a a dozen potentillas; four yellows, a pink and a white. The yellows bloom from June to frost, the white and pinks don't bloom til mid-July. There's a single lilac which bloomed feebly, *a* rose, and a couple of wolf-willows.

All of these were rankly overgrown, so, as you have been told a dozen times, I've been pruning at every opportunity. Still haven't completely finished but I have all summer. 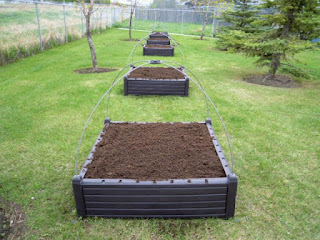 Aside from just plain neglect, the difficulty with this "garden", such as it was, was a lack of texture, colour, and variety of forms. I began by putting in loads of tulips, daffodils, narcissus, squalls and grape hyacinths last fall. We had a horrendously dry winter and only about 1/2 of the bulbs survived to come up, and of those only half have flowered.

The aphid infestation and the dry winter was the death knell for several shrubs. I know it isn't nice to celebrate the death of a poor hapless plant, but having those ugly things dug out out gives me a place to put healthy and beautiful plants in their place.

The list? All of these are in multiples except the bergenia and foamflower, which they only had one of to sell. So alyssums, several kinds of mint, thyme, bergenia, foamflower, lavenders, may midnight sage, salvia, hostas, geraniums, coreopsis, petunia, calibrachoa, impatiens, and lots of dusty miller. A mix of perennials and annuals to get a quick shot of colour. I also bought a big bag of poppy seeds and will seed them generously in the sunny areas and around the trees. They don't bloom long but they put on a show when they do.

Tomorrow or Monday I hope to finish putting the rest of the rest of the flowers in. Everyone coming and going as I worked today commented on how beautiful the entry garden is looking. I am pooped, but feeling so happy and content. I wasn't sure how I'd live without a garden, and here I have the biggest one I've ever had, with big husky men to do the hard work for me, and someone else footing the bills. Now is that heaven or what?

A Thousand Pounds of Love 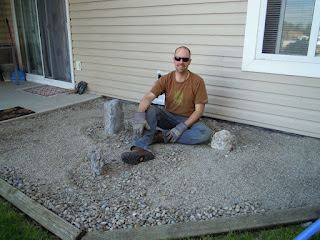 I don't know what else to call it. In Japanese it's called a karesansui or dry landscape garden but when someone, namely your eldest son, totes at least a thousand pounds of rocks and gravel to build you one, you can hardly call it anything other than love.

This started, you may recall, two or three weeks ago with a trip to the mountains to select rocks. I picked half a dozen candidates, we ended up using three, as more would have been too much crowding for the space. We'd had some difficulty locating the right gravel. He ended up at a local gravel and stone purveyor and brought 300 pounds of small gyra stone. We thought 300 pounds would be plenty. We were wrong.

We got rocks set, gyra poured over the larger gravel base and discovered we needed twice as much gyra stone as we'd bought. He made a mad dash for the stone purveyor a good distance away. He arrived four minutes after they closed. So he hunted around in the various home stores until he found pea gravel of a reasonable colour match, though larger, and bought a couple hundred pounds of pea gravel in bags.

As we poured it on it looked as if it was going to be a disaster, but bit by bit we worked the large 1" bore gravel to the outside edges and as a kind of "wake" behind the stones closest to the wall and outside curbing, and blended in the rest - and it turned out beautifully. Admittedly it is not going to be a zen garden that takes to raking patterns, we could not find stone fine enough to allow that, but that's probably for the best as it looks good without the burden of daily maintenance. 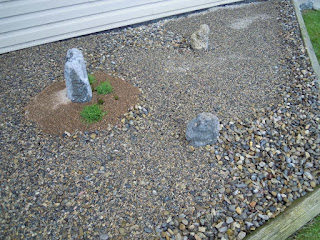 We installed lawn edging around the largest standing stone, and inside the perimeter put a bag of garden soil. I planted moss and then we covered the raw soil with a layer of crushed clay, to hold the moisture for the moss, hide the black earth and make the colours more consistent. Now I hope that island of soil is not right under where the water pours off the roof during heavy rains, or the downpour will make a mess of my pretty moss garden. 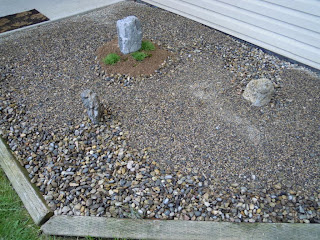 We both also discovered how difficult it is to photograph a garden like this effectively. The "good" spots are filled with shrubs, and neither of us felt like lying on the sidewalk to get the proper perspective, since I'd been hosing down the sidewalk and it was not only wet but muddy. Trust me, it's much nicer than one would expect from my poor pictures. And the moss has doubled in area covered overnight!

As people came and went we had many positive comments, people seemed really happy to see something done with the weedy gravel patch that had been uncovered when I pruned back the shrubs. We've had three or four warm days and there are tulips, daffodils and narcissus in little bunches all up and down the flower beds, and more green spears emerging every day. 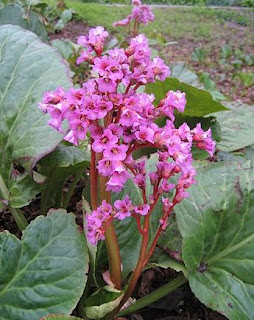 We also planted what's called elephant ears locally but is really a member of the saxifrage family bergenia and a foamflower. I had foamflower in my garden in Summerland and loved it. Both bergenia and foamflower do well in the shade and should do well where they are planted. They will get a couple of hours of morning sun and be in the shade the rest of the day. The bergenia gets quite large and I'm now wondering, looking down from the balcony, if I didn't plant it a bit close to the sidewalk, but even if it grows over the sidewalk at that point it won't be in the way.

All in all a lovely day with my big boy - who lived up to his childhood nickname of "Sunshine" - and brought me flowers and 1000 pounds (rather than carats) of rock for Mother's Day.

I live with one. He's kind of like one of those crazy wind-up toys that charges into walls and bounces off, except he doesn't bounce that well. While unloading the garden bed kits for our new community garden last Friday he slipped on the gravel in the parking lot, fell and broke his right elbow.

I was upstairs unloading my cart when it happened. Not easily dissuaded from his duty (the postal service missed hiring someone obviously born to carry the mail through sleet, snow, rain and dead of night), he loaded the half-dozen four foot long boxes on our little trolley and managed to somehow get them through two huge heavy doors with a dangling right arm.

He then got them all on the elevator, except they all kept falling off the trolley, and getting off the elevator he got boxes and trolley wedged in the door. I heard the commotion of falling boxes and elevator bell/buzzer and thought, "What the....?"

Seeing his white face and that weirdly shaped arm made my knees weak. I helped him down the hall and got him seated on the sofa in the living room, then rescued the boxes from the jammed elevator door.

I'd already been out shopping (obviously) and the allergy medication I'd taken earlier had left me shaky, so I called Ian and asked for help. He jumped to and was here in half an hour and we were off to the emergency room.

Long story short, his right elbow is broken. The end of the bone is sheared completely off. But it's a not a break they can set and they are trying to avoid surgery if possible. He's been in a restrictive sling but we saw the orthopedic surgeon this morning and he said that Tony must now begin to use the arm, despite the pain, to keep the elbow from freezing up. Poor old poop. He's not the happiest of campers. It hurts to wear the sling, it hurts to take it off, it hurts to sleep, it hurts to move, it hurts period.

He's also a sort of appealing pinto-pony pattern of bruises on his right side and down his leg, minus some skin and seriously shaken up. We bought him some different shoes on the way home from the surgeon's clinic today. Good tread on the bottom, and velcro closures so he doesn't have to mess with laces.

VanGoghvideo
View more presentations or Upload your own.
Posted by Deb at 11:29 PM 1 comment: