Gravity, Thou art a heartless bitch!

All around a most unsettling week. Where to start, small and work up, big and work down or sequentially? Let's go sequential, which begins wonderfully, with a lovely red early Christmas gift from our two sons. It went like this, "We are buying you a new car, what do you want?"

Well. That was a promising beginning. 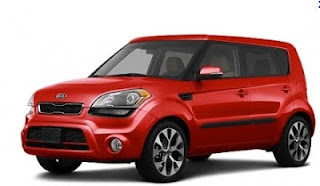 A week ago today we headed for the new car store and after the usual to-and-froing and licenses and deciding on warranties and what-not on Monday we had this bright new red KIA Soul to drive home. Sweet. We have named it Salvador in honour of our late and beloved big red boy.

The timing of the KIA couldn't have been better. Tuesday at noon we had appointments at the specialist's dental clinic in the regional hospital all the way across town. We zipped across town in good time and I dropped Tony off at the front door 15 minutes prior to the appt and went to find a parking spot. Unfortunately there were no parking spots. The parkade was full.

I was directed to the parkade south of the medical school which is a four block walk away, and requires driving back into traffic, down the road, and negotiating a labyrinth of back roads before accessing the parkade. I drove around and around and around inside for 25 minutes waiting for a spot to open up. Finally parked, and hiked with my cane through the maze of hallways in the medical school to get to the hospital. The dental clinic is on the farthest end, so from the time I dropped Tony off until I reached the clinic was 45 minutes.

I walked in the door and the receptionist told me my husband had fallen down a flight of concrete stairs and was in the trauma unit with a possible skull fracture, broken bones and bleeding. I was wanted in the emergency department as quickly as possible.

The emergency department is in the opposite end of the hospital from the dental clinic. There is construction everywhere. The hallway to ER is blocked. I had to hunt around until I found a detour. I finally arrived and they said they don't know where he is, he hasn't arrived yet. (WTF?)

I sat there shaking for three or four minutes when about 10 people and a gurney came trundling down the hall, and on that gurney was my extremely bloody husband. I guess if you are going to fall down the stairs a hospital is a good place to do it. There were a couple of medical staff on the stairs with him when he fell, so he got immediate care. But they didn't move him until they'd stabilized his neck and spine and were at least trying to stop the bleeding which was coming from 20 cm (8 inch) gash on his head, where he had a lump the size of a baseball.

He had fabulous care, with a CT scan, full x-rays of head, neck, spine, arms, legs, all kinds of lab work, cardiac tests… He actually passed out on the stairs and tumbled down, since he was unconscious he didn't even try to protect himself, so he had no "protective" injuries but he broke his collarbone where he and a step collided and he is a mass of huge bruises from head to toe. It took 12 stitches to close the head wound.

About eight hours later I had to get the car from the parkade. It was cold, pitch dark, the medical school access was locked, so I had to walk several blocks through the snow (no sidewalks, no lights, no crosswalks and no signs) hunting for the parkade. By the time I found it I was so tired and stressed out I could not read the instructions on the machine which tells you how to pay for your parking. Finally a woman came along and seeing my distress asked if I needed help. I told her I hadn't a clue how to use the machine, so she did it for me, gave me my change, and told me how to redeem the ticket.

There were no signs saying how to get back to the hospital so I asked a policeman for directions. (He and his cruiser were in the middle of the road.) He told me I needed to turn right, and after doing that and going all the way round I realized I had actually needed to turn left. I retraced my steps and when I finally found my way back to the hospital, I missed the emergency pickup entrance (no lights, no signs) and had to drive all the way around again. By the time I found Tony and picked him up I was ready to head for the nearest bridge and jump.

The good news is that, after four days he is in slightly less pain than he was, and he is able to move around more easily. I am still shaking.

We can change the world - we already have

This week's "super-storm", which hardly even qualified as a hurricane as far as wind speed is concerned, but which inundated New Jersey, Manhattan and other parts of the Eastern Seaboard, appears to have slapped a few people upside the head and made them realize that climate change is not just a "Liberal" conspiracy but a real threat.

How long are we going to continue to keep our heads in the sand? Time to think seriously about instituting energy policies which support the 350 Initiative, a worldwide movement to reduce the CO2 level in the atmosphere back to 350 parts per million, a point where we can avoid global climate catastrophe.

Green energy, wind, solar and water power, combined with conservation, new building codes which require new homes to be energy self-sufficient, and the kind of resolve that saw us through two world wars could see this problem solved in the next 25 years. Do we have a choice?

[David Attenborough]
We are a flexible and innovative species and we have the capacity to adapt and modify our behavior. Now, we most certainly have to do so if we're to deal with climate change. It's the biggest challenge we have yet faced.


[Bill Nye]
The same thing that keeps the Earth warm
CO2!
May make the Earth too warm
It holds in heat


[Richard Alley]
The evidence is clear


[Nye]
The globe is getting too warm


[Alley]
We can avoid climate catastrophies
We can do this


[Nye]
We can change the world


[Alley]
Science offers us answers
To these huge challenges]


[Nye]
It's one global ecosystem


[Nye]
We can change the world


Warm, wet, cold or dry
Climates all start in the sky


When you burn them, add oxygen
That makes C02 that goes in the air
We're reversing the process by which they formed