Getting Off the Bottle

In the USA and Canada billions of plastic bottles are "consumed" annually. That is they are used once and discarded. The manufacture of these bottles consumes about 50 Million barrels of oil annually, and only 1/4 of the bottles are recycled. That means most of them end up in the landfill, where they will slowly degrade and release toxic chemicals into our water supply and soil.

[Edit] Brett made a comment which included a link to this YouTube video called "Twenty-first Century Waterfall" which visually illustrates our "use and discard" plastic bottle philosophy.

Like an increasing number of cities, towns and villages the world over, the water in our little town is considered "unfit to drink" for about six months of the year due to the suspension of particles in the water. This is a problem up and down the valley, so huge stacks of plastic bottled water grace the entrances of stores from April to October.

Early in the season, when the grocer's water dispenser was broken down and we were caught without water, I bought a case of litre bottles off the grocer's shelf. Later I consoled myself that it was the only bottled water left to buy that day, but it was cold comfort. I had assumed the "Fiji" on the label was a brand name until I read the label between swigs. The thought that I was drinking water shipped almost 10,000 km literally made me choke. 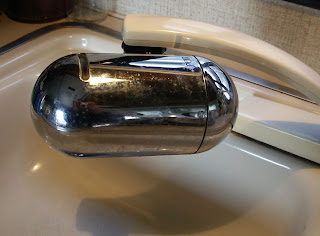 I think it was at that point that we decided to buy a water filtration unit. Filtering your own water is better for the environment for several reasons.

1) The water is used at its origin. No trucks, trains, ships or trips to the store involved.

2) No power consumed in processing and bottling the water,

3) No bottles required, so no oil or energy used in the production of the bottles themselves,

4) No shipping of empty bottles to the bottling plant, so no fuel used there,

5) Fewer bottles to end up in landfills,

6) And as a bonus for your back, no need to haul heavy cases of water home from the store.

Our filter unit screws onto the faucet, and cost about $13.00 initially, (with a filter included). Replacement filters cost about $5.00. Each filter is good for an estimated 300 litres of water. The filter can be turned on and off as needed, so we filter only the water we drink, make coffee and tea, and cook with. We found that a filter lasts from three weeks (when our tap water is at its muddiest) to three months, when the water is clear.

Here the 500 mL (16 ounce) bottle is the prevalent size. If you look at it from a bottle standpoint, a filter cycle which produces just 200 litres of clean water negates the need for 400 500 mL plastic bottles.

The price for a 24 case of 500 ml bottles of water was $7.99 at the local grocers today. But let us put aside the cost of the water and look only at the bottles. The environmental fee for a plastic water bottle is five cents, so the savings on environmental fees alone on 400 bottles is $20.00. A filter pays for itself in its first cycle, and after that puts money in your pocket every time you drink a glass of filtered versus bottled water. Refills costing $5.00 pay for themselves within 50 litres of water.

We also bought a stainless steel thermos water bottle for taking with us when we make trips to town etc. This replaces the plastic bottles we used before, but which we learned were a source of Bisphenol A, a chemical compound found in many reusable plastic water bottles.

Over the course of the summer we used three filters, which cut our bottle usage by about 1200 bottles. If everyone who drinks bottled water did the same, think how much oil, energy, hydrocarbons and waste we could save. If you use bottled water do the environment a favor and shop for a filter next time you go to town!

Great post! There's a video on YouTube which helps to visualize the number of bottles being discarded (and not recycled) each second. You can find it here - http://www.youtube.com/watch?v=OZbTXDkrD1o

This is such a great video that I embedded it in the post.

Thanks for the heads-up!