This will be mostly pictures, if I can get it to work that way! Sometimes Blogger has other ideas, so this may end up being three or four posts! Or I may just add words to get the pictures to line up. You'll see what I mean.

Anyway, my tomatoes are getting to the point where they need larger homes. And I wanted to see if transplanting them into a sub-irrigation planter (SIP) would get better results than a standard peat pot, or newspaper pot. I made eight or ten large SIPs (from two litre pop and juice bottles) and a couple of small ones (500 ml pop bottles).

To begin with you remove the label and mark the bottle with a sharpie-type felt pen at about two-thirds of the way up. Draw all the way around. If you don't have a steady hand support the marker with a can. I used a No-Salt shaker for the larger bottles and a bean can for the smaller ones. 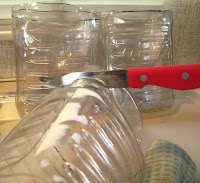 Using a knife, make a cut large enough to slip a pair of scissors into. I used a horribly dull knife with a lurid red-orange plastic handle which came with a small cutting board I bought at the dollar store, but you don't need to buy one like mine. Any crummy old knife will do. It may help with the pop bottles to pinch the plastic up into a crease. Try to avoid losing any fingers during this delicate part of the operation.

One you cut a slit in the side you can use scissors to cut the bottle apart. This colour must be cheap like borscht in China, look, my knife and scissor handles almost match!

While this matching of utensils isn't an essential part of the process, design is so terribly important to Martha (Stewart) and I, and probably to you, dear reader. I wouldn't have even considered exposing you to the shock of ill-matched utensils and tools. I think too much of you - really!

Here you see the two halves. Aren't they lovely? Such pretty plastic! So innocently indestructible, so unlikely to be recycled according to all the experts. And here we are keeping it out of the landfill, which is where plastic is landing now that the price of recyclables has tanked.

So here we are, green as grass, reducing, reusing, recycling. I have plans for these planters and expect them to last me until I am compost myself. I'll leave them to you in my will if you beg hard enough. Application line begins to the right. I could be bribed, preferably with laying hens. Any exotic type, though I'm inordinately fond of the plain old Rhode Island Red and wouldn't turn one or two down. 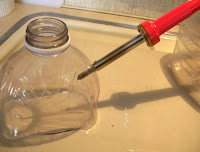 Using a hot soldering iron poke six to eight holes in the top section of the bottle. These will allow air to reach the roots. Also poke a hole in the bottom half about two-thirds of the way up to serve as a watering port and drain hole. Avoid poking holes in yourself, the cat (who will be nosing around) and the waterbed. And lock the children outside while you are doing this. If they complain tell them you are building their legacy. Did you notice that my soldering iron matches both my knife and scissors? I planned this over a number of years, I really did. You wouldn't believe how long it took me to find a pumpkin-coloured soldering iron. Pumpkin is the chic colour for soldering irons this season, as it was for scissor handles when I bought those scissors five years ago and the knife a couple of years back. 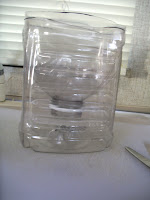 Invert the top half of the bottle into the bottom half. The juice bottles are cool for this, since they have ridges which sort of match up, lock together and keep the whole shebang from coming apart. Pop bottles not so much, but this has its advantages. The pop bottle "planter" section is also deeper, and so probably better for anything with deeper roots. And it's easier to water, as you can simply pick the top section out and add water to the bottom part. Much harder to do that with the juice bottles because they snug together. 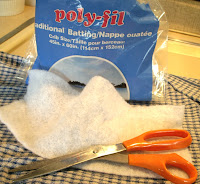 Cut a piece of polyester quilt batting an inch wide and about 10 inches long. This will serve as the wick to draw water up into the soil. Fold the batting in thirds, so it's long and skinny and three thickness thick. I have a picture of the batting folded into thirds lengthwise, but there's no room for it. I presume my readers can both count to three and fold, and any who can't can try to figure out how to e-mail me for an instructive photograph. By the way, don't substitute cotton or any organic fibre for the polyester, as it will rot and support yucky bacterial growth. And besides this is strictly a plastics project. Don't confuse the issue. 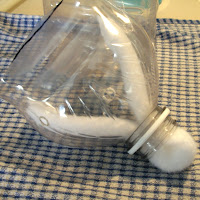 Fold the wick in half and slide the doubled-over middle section into the neck of the bottle, leaving the ends projecting up into the bottle. Fill the bottom part of the bottle with water, making sure to soak the batting. This will be the only time you should ever water from the top. From here on out you add water through the port you burned with the (not-necessarily pumpkin-coloured) soldering iron, or you pick the top (planted) half up, pour water into the bottom half and replace the top into the bottom. 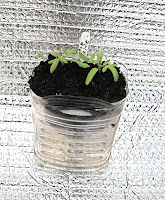 Now fill the top section with very damp potting mix and transplant your seedling into it. You're really only supposed to put one seedling in, but I have lots of seedlings and not many bottles, so I cheated and put two in. They look happy. I will make some newspaper pots for the seedlings I am planning to give away on garden day. I don't have enough bottles to make these for every seedling.

The brassicas need transplanting out badly but it has been cold, windy and rainy the last two days. Last night we had torrential rain and high winds. So I have been postponing planting these little guys out in the garden until this cold spell breaks. Hopefully soon. I have to make a planter for them from two of my garden pots and just haven't had the ambition to work in the weather, nor did I have all the supplies I needed until day before yesterday.

You are your very own EveryReady Bunny.

I keep looking at the work outside...I either can't get it together or it hails.

Love the new photo on your blog! Looks like Spring is coming to Canada :) I may try the SIPs too...for some little flower seedlings. Hugs, neice Susan

Hey Zak's Mum, this is great. Zak just pointed me to your blog to show me a piccy of where he was chatting from.

I have a load of tomatoes that need to go into larger pots, I have just been visited by my sister-in-law who insists on drinking water from plastic bottles, and just generally, what are the chances. Wow the internet is just beautiful.

I try to use old packaging for all my garden pots, but I constantly end up stabbing myself when making the drainage holes.

Soldering Iron - now I see where Zak gets his genius from.

Welcome! I have a flat of tomato seedlings which need to graduate into larger containers. I've got about 10 of the larger SIPs made, but ran out of bigger plastic bottles. I had two water bottles and they make a SIP which is the perfect size for a single seedling. The ones I transplanted so far seem to be doing well. If it would just warm up they'd be happier, and so would I!

I have just run out of larger pots for my tomatoes (I overdid it on the seedlings and basically have too many but I never have the heart to just let them die, let alone kill them - they usually end up on Freecycle). But in the meantime I have heaps of plastic bottles from the sister in law.

More worryingly, I have just been up to my vegetable plot and discovered pea and bean weevel on my broad beans - horror!!!

Don't suppose you know any organic cures to you?

I have read up on Pyrethrum which is made from Chrysanthemums and apparently allowed in organic farming but also nukes bees, fish and all the good bugs. Any knowledge of this?

My transplants put into SIPs are doing really well. I just haven't had time to transplant any more. On the weevil side of things; A safe, environmentally friendly insecticide-fungicide can be made from 5 TBS of any vegetable oil, 1 TBS. of baking soda, and 4 TBS. of liquid dish soap mixed in 1 gallon of water and sprayed on the plant (specifically on the bugs if possible). I'm not sure that this won't bother good bugs, as well as bad ones that it touches, but it won't stick around to harm anything that comes along later. Good luck, it's rotten when the bugs beat you to the grub! ;)

Thanks Deb, someone else has just told me to use soapy water so this sounds like the perfect recipe. I don't like the idea of using full-on pesticide even if it is labelled as "organic".

Glad the SIPs are doing well.

Simple Not Easy, and quite so!

Many plastic bottles contain compounds that dissolve in the soil (and then becoming absorbed by the plants in your container). The polyester that is used for the capilary working of the supplied water is even nearer to the plant's roots. Better use some biodegradable natural stuff like wool or hay.

Some of the compounds mentioned before are under serious suspicion of causing male infertility. Growing the cause of your future dead sperms (the veggies in your plastic containers) is a bit alarming, isn't it?

Look at Wikipedia for a description of the Spanish botijo, an amphora shaped bottle that works the same way, made from a more sustainable material: clay. http://en.wikipedia.org/wiki/Botijo

And please recycle those plastic bottles!